​Poetry is language used in a particular way.

It can, but does not always, involve rhyme, rhythm and metre.

It is a way of sharing experiences, of telling a story or expressing feelings or ideas.

Poems are verses which may be spoken or sung.

The form, rhythm and word choice for imagery, the creation of pictures with words, is important in poetry.

The words may form patterns of sound, verse or thought.

​Usually, poetry appeals to the imagination of the audience and can create vivid visual images. 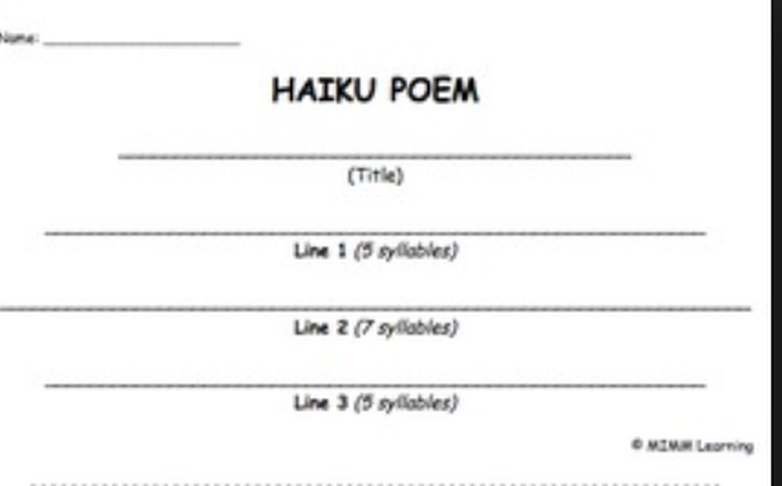 A NARRATIVE POEM tells a story and can be about anything. Sometimes the poem's lines have a rhyming pattern. Sometimes they don't rhyme at all.

Banjo Patterson
The Man from Ironbark
​It was the man from Ironbark who struck the Sydney town,
He wandered over street and park, he wandered up and down.
He loitered here, he loitered there, till he was like to drop,
Until at last in sheer despair he sought a barber's shop.
`'Ere! shave my beard and whiskers off, I'll be a man of mark,
I'll go and do the Sydney toff up home in Ironbark.'
The barber man was small and flash, as barbers mostly are,
He wore a strike-your-fancy sash, he smoked a huge cigar:
He was a humorist of note and keen at repartee,
He laid the odds and kept a `tote', whatever that may be,
And when he saw our friend arrive, he whispered `Here's a lark!
Just watch me catch him all alive, this man from Ironbark.'
There were some gilded youths that sat along the barber's wall,
Their eyes were dull, their heads were flat, they had no brains at all;
To them the barber passed the wink, his dexter eyelid shut,
`I'll make this bloomin' yokel think his bloomin' throat is cut.'
And as he soaped and rubbed it in he made a rude remark:
`I s'pose the flats is pretty green up there in Ironbark.'
A grunt was all reply he got; he shaved the bushman's chin,
Then made the water boiling hot and dipped the razor in.
He raised his hand, his brow grew black, he paused awhile to gloat,
Then slashed the red-hot razor-back across his victim's throat;
Upon the newly shaven skin it made a livid mark --
No doubt it fairly took him in -- the man from Ironbark.
He fetched a wild up-country yell might wake the dead to hear,
And though his throat, he knew full well, was cut from ear to ear,
He struggled gamely to his feet, and faced the murd'rous foe:
`You've done for me! you dog, I'm beat! one hit before I go!
I only wish I had a knife, you blessed murdering shark!
But you'll remember all your life, the man from Ironbark.'
He lifted up his hairy paw, with one tremendous clout
He landed on the barber's jaw, and knocked the barber out.
He set to work with tooth and nail, he made the place a wreck;
He grabbed the nearest gilded youth, and tried to break his neck.
And all the while his throat he held to save his vital spark,
And `Murder! Bloody Murder!' yelled the man from Ironbark.
A peeler man who heard the din came in to see the show;
He tried to run the bushman in, but he refused to go.
And when at last the barber spoke, and said, `'Twas all in fun --
'Twas just a little harmless joke, a trifle overdone.'
`A joke!' he cried, `By George, that's fine; a lively sort of lark;
I'd like to catch that murdering swine some night in Ironbark.'
And now while round the shearing floor the list'ning shearers gape,
He tells the story o'er and o'er, and brags of his escape.
`Them barber chaps what keeps a tote, By George, I've had enough,
One tried to cut my bloomin' throat, but thank the Lord it's tough.'
And whether he's believed or no, there's one thing to remark,
That flowing beards are all the go way up in Ironbark.
Ironbark Quiz
Australian Bush Poetry

Figurative language is a word or phrase that does not have its normal everyday, literal meaning. It is used by the writer for the sake of comparison or dramatic effect.

Similes, metaphors, idiom, hyperbole, and personification are some examples of figurative language.

A simile uses the words “like” or “as” to compare one object or idea with another to suggest they are alike.
Examples:
Busy as a bee.
As dark as night.
As stubborn as a mule. ​
As fit as a fiddle.

The metaphor states a fact or draws a verbal picture by the use of comparison. A metaphor makes a direct comparison - it says you are something.
Examples:
Hair like silk, with skin like milk.
You're toast.
You are my sunshine.
It's raining cats and dogs.

An expression that doesn't exactly mean what the words say
Examples:
She spilled the beans.
Theres a frog in my throat.
You are what you eat.
Woke up on the wrong side of the bed.

An exaggerated statement.
Examples:
My backpack weighs a tonne.
Your brain is the size of a pea.
If I don't get a new smartphone, I will die!
His stomach is a bottomless pit.

Giving human qualities to animals or objects.
Examples:
The stars winked at me.
The bees played hide and seek with the flowers as the buzzed from one to another.
The clever stick.
The alarm clock yelled at me in the morning.

'Twas Mulga Bill, from Eaglehawk, that caught the cycling craze;
He turned away the good old horse that served him many days;
He dressed himself in cycling clothes, resplendent to be seen;
He hurried off to town and bought a shining new machine;
And as he wheeled it through the door, with air of lordly pride,
The grinning shop assistant said, `Excuse me, can you ride?'

`See, here, young man,' said Mulga Bill, `from Walgett to the sea,
From Conroy's Gap to Castlereagh, there's none can ride like me.
I'm good all round at everything, as everybody knows,
Although I'm not the one to talk -- I HATE a man that blows.
But riding is my special gift, my chiefest, sole delight;
Just ask a wild duck can it swim, a wild cat can it fight.
There's nothing clothed in hair or hide, or built of flesh or steel,
There's nothing walks or jumps, or runs, on axle, hoof, or wheel,
But what I'll sit, while hide will hold and girths and straps are tight:
I'll ride this here two-wheeled concern right straight away at sight.'

'Twas Mulga Bill, from Eaglehawk, that sought his own abode,
That perched above the Dead Man's Creek, beside the mountain road.
He turned the cycle down the hill and mounted for the fray,
But ere he'd gone a dozen yards it bolted clean away.
It left the track, and through the trees, just like a silver streak,
It whistled down the awful slope, towards the Dead Man's Creek.

It shaved a stump by half an inch, it dodged a big white-box:
The very wallaroos in fright went scrambling up the rocks,
The wombats hiding in their caves dug deeper underground,
As Mulga Bill, as white as chalk, sat tight to every bound.
It struck a stone and gave a spring that cleared a fallen tree,
It raced beside a precipice as close as close could be;
And then as Mulga Bill let out one last despairing shriek
It made a leap of twenty feet into the Dead Man's Creek.

'Twas Mulga Bill, from Eaglehawk, that slowly swam ashore:
He said, `I've had some narrer shaves and lively rides before;
I've rode a wild bull round a yard to win a five pound bet,
But this was the most awful ride that I've encountered yet.
I'll give that two-wheeled outlaw best; it's shaken all my nerve
To feel it whistle through the air and plunge and buck and swerve.
It's safe at rest in Dead Man's Creek, we'll leave it lying still;
A horse's back is good enough henceforth for Mulga Bill.'
Powered by